Bitcoin has formed a head and shoulders reversal pattern on its 4-hour chart but has yet to break below the neckline to confirm that a downtrend is in order. The formation spans $4000-5000 so the resulting selloff could be of the same size, taking bitcoin to $3000.

The 100 SMA is above the longer-term 200 SMA so the path of least resistance is still to the upside. However, the gap between the moving averages is narrowing to indicate weakening bullish momentum. If a downward crossover materializes, selling pressure could pick up and spur a break below the neckline around $4200.

Stochastic is pointing up to show that buyers could regain control of bitcoin price action. A bit of bullish divergence can be seen since stochastic made higher lows while price mad higher lows. RSI is pointing down but appears to be on the move up as well, indicating the presence of bullish pressure. 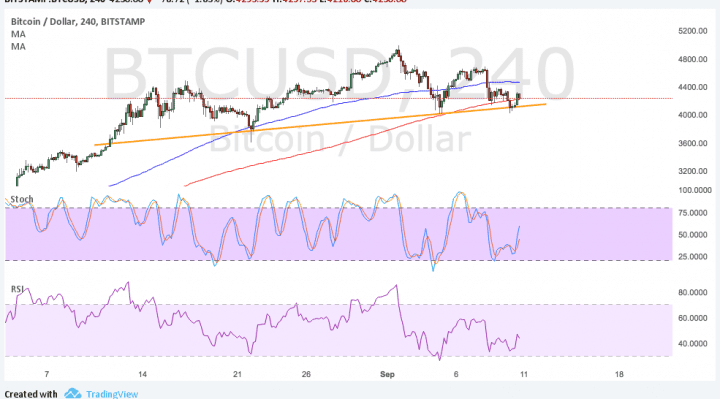 The cryptocurrency sold off sharply last week when the Chinese government followed through on its ICO funding ban with an announcement to shut down major exchanges. According to sources, “the future in China can not have the so-called virtual currency and the currency between the trading platform.”

However, this was later on downplayed as other sources said that the basis of latest announcement that China is banning ICO funding and exchanges is unreliable since there has been no formal statement from a government official.

BTC China also responded to the reports, saying: “The Caixin report says that regulators have not said bitcoin itself is illegal, and have not decided to prohibit private, one-on-one bitcoin transactions.” Along with OKCoin and Huobi, these three exchanges account for 60% of the bitcoin activity in the country, although China no longer holds the top spot in global bitcoin volumes.

Looking ahead, traders would likely keep close tabs on bitcoin updates from China to see if any official confirmation is announced. The lack of one could lead to more gains in bitcoin.