Bitcoin tumbled sharply upon getting a bit more confirmation that the Chinese ban on bitcoin exchanges is certain. Price fell through the head and shoulders neckline previously highlighted and is making its way down to the next potential area of interest.

The $2500-3000 area has previously been resistance and could hold as support moving forward. Applying the Fibonacci retracement tool on the latest swing low and high on the daily time frame shows that the 61.8% level coincides with this area.

The 100 SMA is above the longer-term 200 SMA on the daily chart so the path of least resistance is still to the upside. The gap is still widening to show strengthening bullish pressure. Also, the 100 SMA dynamic inflection point lines up with the 61.8% Fib and area of interest, adding to its strength as potential support. 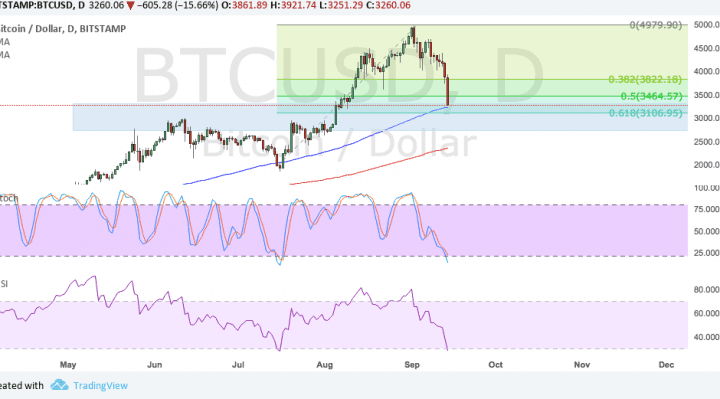 CEO of BTCChina Bobby Lee just tweeted that they would halt trading on their exchange by September 30, giving more certainty to the rumored shutdown of bitcoin exchanges by the Chinese government. This follows a joint statement issued by several agencies on banning ICO funding.

Bitcoin has also been under pressure on risk-taking and JPMorgan CEO Jamie Dimon’s remarks on how the cryptocurrency is a fraud and that the bubble would burst soon. The return in risk-taking as North Korean jitters are on the sidelines also led to unwinding in long cryptocurrency positions, although this situation could still change at some point.

Another provocation from North Korea could lead to a flight to safety and dollar weakness at the same time, allowing bitcoin to bounce off the nearby area of interest. On the other hand, more news of Chinese exchanges shutting down operations could continue to hurt bitcoin.