Bitcoin bulls seem to be reviving the uptrend as price has just broken through the top of its descending channel on the 4-hour time frame. Price is still stalling at an area of interest or former support around the $4000 area, though.

A break past this level could be enough to confirm that further gains are underway, possibly allowing bitcoin to test its all-time highs or create new ones. On the other hand, if selling pressure returns, price could either make a retest of the broken resistance or drop back to the channel support at $3000.

The 100 SMA is below the longer-term 200 SMA to signal that the path of least resistance is to the downside. Price is also testing the dynamic resistance around these moving averages, which might be the line in the sand for the selloff.

Stochastic is already indicating overbought conditions and might be looking to turn lower and reflect a return in selling pressure. RSI has room to climb so bitcoin could follow suit until the oscillator turns down from the overbought level as well. 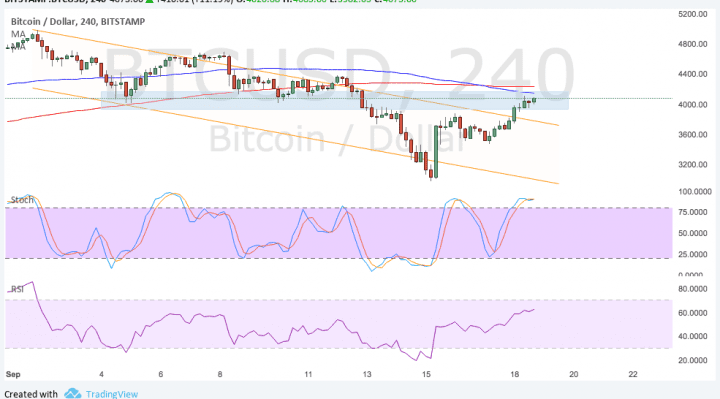 Traders seem to be shrugging off confirmed reports that Chinese authorities are shutting down bitcoin exchanges in the country as the market share is still pretty huge in other countries like Japan and South Korea. At the same time, dollar demand could slide ahead of the FOMC statement as traders lighten up on their holdings in anticipation of potential surprises.

Although the Fed isn’t widely expected to adjust interest rates this time, traders are on the lookout for clues about the December meeting. Also, the US central bank will release updated growth forecasts and downgrades are expected on account of the recent hurricanes. Traders are also hoping to hear more details on the balance sheet runoff but Yellen could continue to downplay this move, possibly leading to more dollar selling.