Bitcoin has pulled up from its dive last week and seems to be forming an uptrend on its 1-hour time frame. Price broke past the resistance around $3800 then climbed to a high of $4124.03 before making a pullback.

Applying the Fib tool on the latest swing low and high shows that the 61.8% level lines up with the broken resistance that might now hold as support. The 50% Fib is closer to the dynamic support at the moving averages.

Speaking of moving averages, the 100 SMA is gearing up for an upward crossover from the 200 SMA to indicate that the path of least resistance is to the upside. In other words, the uptrend is more likely to resume than to reverse. In that case, bitcoin could retest the latest highs or create new ones.

Stochastic hasn’t quite reached oversold levels yet but looks ready to pull higher anytime soon, also indicating a return in bullish pressure. RSI, on the other hand, has room to drop and still seems to be pointing down so bitcoin might follow suit. A break below the lowest Fib could lead to a test of the next support around $3500-3550. 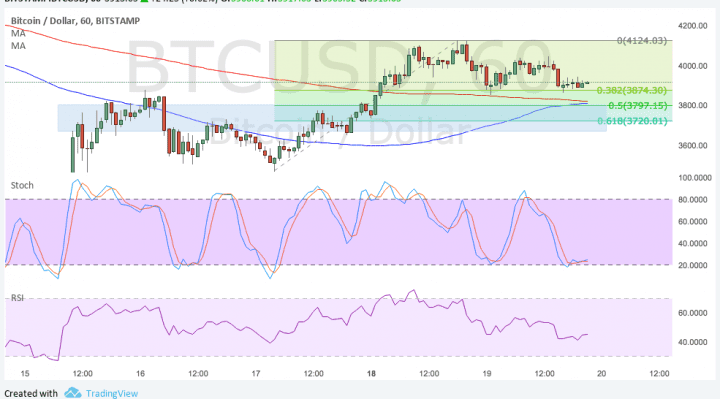 Volatility has been subdued for bitcoin in the past few days, likely due to the drop in activity from China as the government moved to shut down exchanges. A lot of liquidation was seen last week but it looks like activity in other markets such as Japan and South Korea area able to make up for lost volume.

Meanwhile, the dollar has the FOMC decision to contend with and market expectations are that policymakers would downgrade their GDP forecasts to account for the damage from the hurricanes. This could also impact December hike expectations, as well as the timing of the balance sheet runoff.

Another factor to watch out for is the potential return of geopolitical risks from North Korea after Trump recently branded their leader as “Rocket Man on a suicide mission” and threatened to retaliate if they strike. In these cases, bitcoin usually functions as digital gold and takes advantage of risk-off flows.