Bitcoin has formed lower highs and higher lows, creating a symmetrical triangle pattern on its 1-hour time frame. Price is approaching the peak of its formation so a breakout could be due soon.

An upside breakout could mark the start of a longer-term climb while a downside break could mean that a selloff is underway. The 100 SMA is below the longer-term 200 SMA to show that the path of least resistance is to the downside, which suggests that a break lower is more likely than a break higher, but the moving averages could also simply be oscillating to reflect market consolidation.

Stochastic is pointing down, also suggest that that bears are likely to win over. RSI is on the move up, though, so there may still be some buying pressure left. The chart pattern spans $3000 to $4250 so a breakout in either direction could lead to a 250-pip rally or drop. 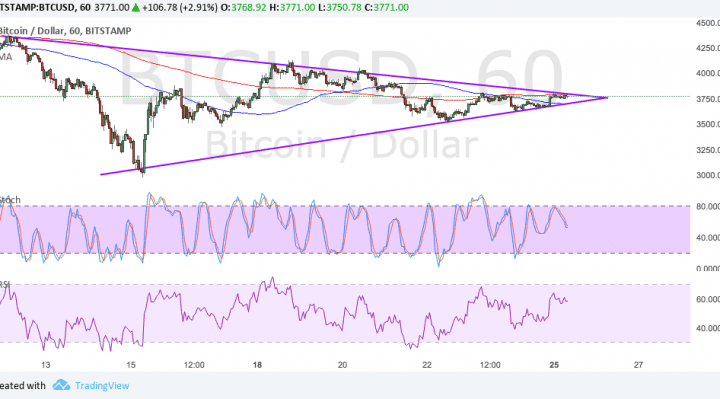 The dollar does have more market factors lined up on its corner as the FOMC’s relatively upbeat statement drew more bulls back in. Last week, the Fed decided to keep interest rates unchanged as expected but signaled that they’re keeping the door open for a December hike. Also, the central bank upgraded growth forecasts for the year and assured that the impact of Hurricanes Harvey and Irma are just temporary.

Meanwhile, bitcoin continues to reel from the recent regulations in China that involved banning ICO funding and bitcoin exchanges. This has led to a lot of liquidation and a large drop in volumes, limiting activity as well. However, many are still waiting for more updates to see if there’s a chance that exchanges could reopen if there are compliance rules to be met with government.

The lack of any positive updates in the next few days could lead to more profit-taking on bitcoin longs while any indication that authorities are open to the idea of allowing bitcoin exchanges to operate would be bullish for the cryptocurrency. A return in risk aversion from North Korea tensions could also lead to a boost for bitcoin.