Bitcoin is starting to trend higher once more, moving inside an ascending channel connecting the highs and lows since last week. Price is bouncing off the resistance around 4275 and might be due for a pullback to support at 4075.

Applying the Fibonacci retracement tool on the latest swing low and high shows that the 50% level lines up with the bottom of the channel. The 100 SMA has crossed above the longer-term 200 SMA to confirm that the path of least resistance is to the upside, which means that the uptrend is more likely to continue than to reverse.

Price already seems to be finding support at the 38.2% Fibonacci retracement level already and might be ready for another climb to the swing high or the 4300 mark. Stochastic is moving lower but looks ready to turn higher to reflect a return in bullish pressure. RSI has more room to drop so there may still be some bearish momentum left in play. 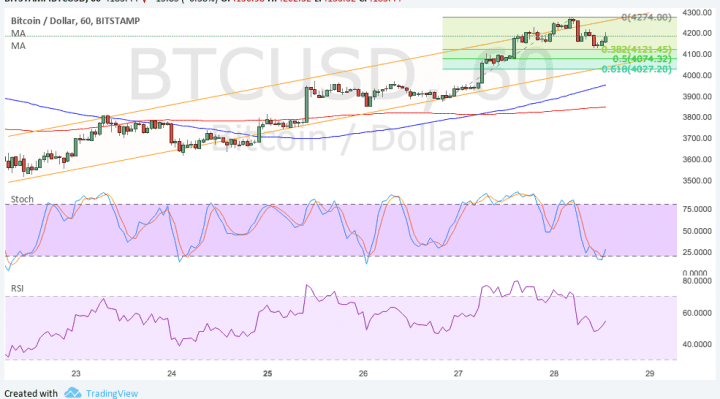 The US dollar has been supported across the board for the past week on renewed FOMC December tightening expectations and the start of the balance sheet runoff in October. The focus on tax reform by the Trump administration has also buoyed US markets higher.

However, Yellen’s cautious tone during her testimony this week led dollar bulls to scale back their positions and sit tight ahead of the jobs report due next week. She did mention that policymakers may have overestimated the strength of the labor market and its potential impact on inflation, so traders might need to get more confirmation before putting on larger positions.

Meanwhile, bitcoin has enjoyed a boost from Morgan Stanley CEO Gorman’s remarks on how the cryptocurrency is not just a fad, emphasizing its other potential applications in finance and other industries. Looking ahead, geopolitical risk could also play a factor in determining bitcoin direction as more provocation from North Korea could have traders running back to digital gold.