Bitcoin is able to stay afloat and bounce back above the support of its rising channel pattern. Tweezer bottoms can be seen, indicating that a bounce is underway.

Price is also staying above the area of interest or former resistance around 4000-4500. If this continues to keep losses in check, bitcoin could bounce back to the swing high around 5000 or until the top of the channel around 5500.

The 100 SMA is above the longer-term 200 SMA on the daily chart, indicating that the path of least resistance is to the upside or that the rally is more likely to resume than to reverse. The gap between the moving averages is widening to reflect strengthening bullish momentum.

Stochastic is heading down, though, so bears might still have the upper hand. A break below 4000 could be enough to signal that a downtrend is underway. RSI is also on the move down so bitcoin might follow suit. 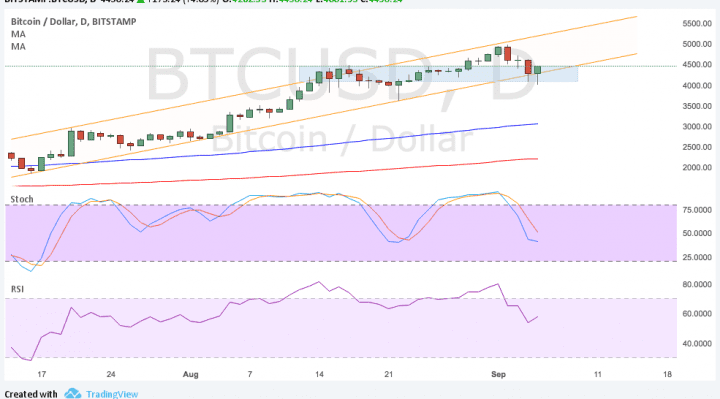 Cryptocurrencies are currently under pressure after several Chinese government agencies issued a joint statement banning ICO funding. This could put a dent on trading activity and volumes in major exchanges and bitcoin startups which account for a huge chunk of the global bitcoin market.

However, bitcoin is also drawing some support as digital gold since tensions with North Korea still haven’t subsided. There are talks of another ICBM getting prepped for testing, so investors are on the lookout for any retaliatory comments from the Trump administration.

Market sentiment could continue to drive bitcoin price moving forward but it’s likely that opposing market factors would keep consolidation going. Any indication that a diplomatic approach could be taken in addressing issues with North Korea could bring risk appetite back in and lead to unwinding of long bitcoin positions.

Apart from that, Fed rhetoric could also influence dollar demand and the latest batch of speeches from policymakers hasn’t been hawkish. Brainard and Kashkari warned about weak inflation and urged caution in considering future interest rate hikes.