The price of Bitcoin is on track to break above $10,000 should it continue to tail explosive upside moves in the Gold market.

So says Alex Saunders, the CEO-cum-co-founder of Australia-based Nugget News. The prominent cryptocurrency analyst said Thursday that BTC/USD could print a $1,000-candle after taking cues from the booming gold market. Excerpts from his latest tweet:

The statements followed Bitcoin’s rally above $9,600 during the afternoon New York trading session on Thursday. As of 1315 local time, the BTC/USD exchange rate established an intraday high at $9,686. The gains appeared as a part of an extended upside move that started earlier this week when Bitcoin was trading near $9,100. 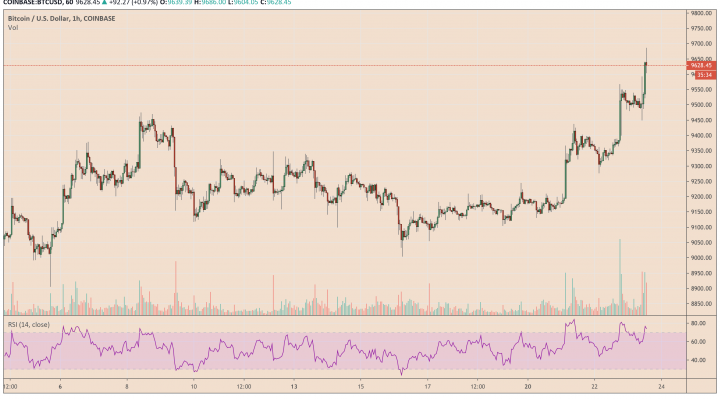 Bitcoin has surged by more than $500 this week. Source: TradingView.com

Bitcoin gains also appeared as most actively traded gold futures jumped by 1.4 percent to $1,892 an ounce. The move uphill eclipsed the precious metal’s August 2011 closing level of $1,891.90. It is now targeting to leap over its all-time high of $1,923.90, as Mr. Saunders mentioned.

Today was also the day when Bitcoin’s one-month correlation with Gold reached a four-month high. Meanwhile, the cryptocurrency decoupled from the S&P 500, the US benchmark index that it religiously tailed over the last two weeks. That may also have served as the basis of Mr. Saunder’s analogy. 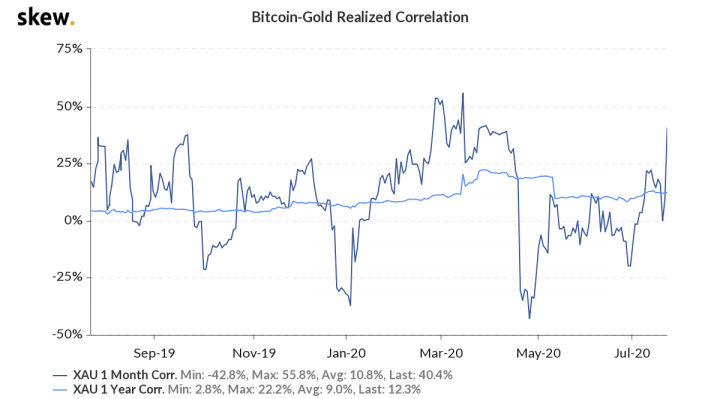 The S&P 500 slipped 0.7 percent on Thursday as investors grappled with concerns over mounting coronavirus infections and its potential to slow down the US economic recovery. The index also fell as new claims for unemployment benefits climbed to 1.4 million this week.

The rise in the gold prices reflected growing uncertainty among investors about a V-shaped economic recovery. Many big names, including bitcoin-loving veteran hedge fund manager Paul Tudor Jones, have admitted adding gold to their portfolios. Their reason is Federal Reserve’s unprecedented monetary policy that is leaving the US dollar weaker than ever.

The US central bank in March 2020 announced a $2 trillion stimulus package. It also sent the benchmark lending rates close to zero. While the policy helped the economy recover to a certain extent, it also made the safest-known haven, the US government bonds, least attractive to hold owing to their poor yields.

Many observers see the infinite money supply as a major reason why investors moved into gold and bitcoin markets. Atop that, rising geopolitical tensions between the US and China also spurred demand for the yellow metal and the cryptocurrency.

“What coronavirus has done is put that extra emphasis on people looking for an alternative to stocks and bonds,” Will Rhind, chief executive of ETF provider Granite Shares, told WSJ. It serves as one of the major reasons why Bitcoin bulls are eyeing an explosive price growth heading further into 2020.