Bitcoin trended in negative territory on Wednesday as investors awaited the release of minutes from the US Federal Reserve’s rate-setting meeting held on July 31.

The benchmark cryptocurrency extended its drop to almost $1,000 at one point around New York noon. It plunged to an intraday low of $9,841.59 on US-based Coinbase exchange. At its weekly peak, bitcoin was trading close to the $11,000 level. The move downhill appeared despite a positive sentiment. On Friday last week, Bakkt, a digital asset wing of Intercontinental Exchange, announced that it would launch daily and monthly bitcoin futures contracts on September 23. The platform confirmed the date after receiving regulatory approval for bitcoin custodianship from the New York Department of Financial Services (NYDFS). 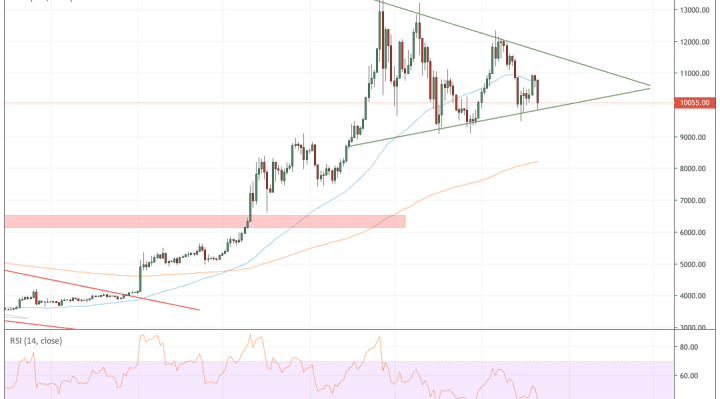 The announcement influenced an impressive surge in the bitcoin price at the beginning of this week. The upside, nevertheless, fizzled in the absence of higher demand for the cryptocurrency.

Bitcoin could be due to face yet another downturn as the Federal Reserve undergoes a split vote on its plans to introduce a 25 basis points rate cut. According to the minutes of the last FOMC meeting released today, several officials favored keeping the interest rates steady, believing that the US economy is doing better. On the other hand, some went as far as demanding a 50 bps rate cut.

Fed chair Jerome Powell is now set to speak at an annual meeting of global central bankers in Jackson Hole, Wyoming, starting this Thursday. The market expects the financial bosses to begin a new round of economic stimulus programs to ease fears of a recession, as indicated by a technical indicator involving the inversion of 2- and 10-year US treasury yields.

Meanwhile, bitcoin is behaving like a spectator watching on the sidelines as the global economy decides its next move. To many, the cryptocurrency is a safe-haven for investors looking to take a break from policy-motivated assets. While to some, it remains an over-hyped instrument that should be avoided because of its history of price manipulation and volatility.

A fed rate cut remains a bullish signal for bitcoin, believes Thomas Lee of Fundstrats Global Advisors. The co-founder said that making borrowing cheaper would give investors more dollar liquidity, which they could route into the bitcoin market as a long-term hedge.

“Bitcoin’s becoming increasingly a macro hedge for investors against things that could go wrong. Rate cuts are adding liquidity. Liquidity is pushing money into all these risk assets and also hedges, which is helping Bitcoin.”