An upbeat mood in the US stock market last night followed losses in the bitcoin market this Friday. 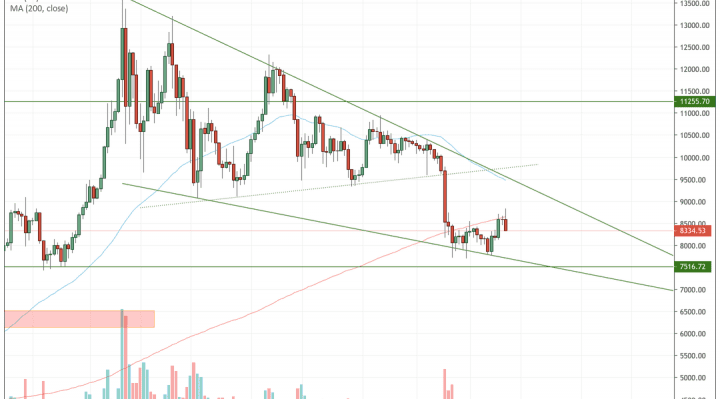 The benchmark cryptocurrency dropped by as much as  5.20 percent from its intraday high of $8,826, coinciding strongly with the improving intraday sentiment in the global equity markets. At first, stocks in Asia surged while hoping for positive outcomes from the two-day meet between the US and China on the trade war. And second, UK Prime Minister and Irish taoiseach Leo Varadkar claimed that they could foresee a deal on Brexit, sending pound up by 0.1 percent.

Events on both sides of the Atlantic Ocean led investors to raise their stakes in risk-on stocks. The US benchmark S&P 500 was further looking to open Friday 0.5 higher as of the time of this writing.

Trade optimism prompted investors’ bid on China’s yuan, a national currency whose devaluation played a significant role in boosting bitcoin’s rate in the second quarter of this year. It touched its 17-day high to establish an intraday high of $0.1409.

Meanwhile, safe-haven yen and the US dollar softened as investors’ appetite for the risky assets surged – even for a short time. Gold, on the other hand, noted a 0.49 percent surge, reflecting investors were attempting to keep its foot on two boats as a full-fledged trade deal remains uncertain.

BREAKING: The U.S. is considering a currency pact with China as part of partial trade deal, sources say https://t.co/Zb0Jcxe3a7 pic.twitter.com/J7mN5zsyGo

Bitcoin remained an unattractive asset. Investors did not recognize the opportunities in the cryptocurrency sector, which could be due to the SEC’s latest rejection of a bitcoin-based exchange-traded fund. The US securities regulator clarified that it still sees the bitcoin market as immature, which is in the hands of price manipulators outside the US. So, it could not expose local investors to those risks, which became the centerpiece for rejecting a Bitcoin ETF.

The move left bulls disappointed, for they expected an approval to bring more institutional capital to the bitcoin market.