After establishing a month-to-date low of $7,296 earlier this week, bitcoin has recovered by up to 5.63 percent.

The benchmark cryptocurrency today established an intraday high of $7,707 – after reclaiming $7,500 as interim support. The move uphill helped revive a short-term bullish sentiment among traders, further pointing to extended upside correction based on technicals.

In retrospective, bitcoin was trading inside a Falling Wedge pattern, as FXDailyReport.com earlier noted in this analysis. The cryptocurrency, almost correctly, tested the lower trendline of the Wedge before pulling back briefly. The bounce brought the Wedge’s upper trendline back in view as the next potential upside target, as shown in the chart below. 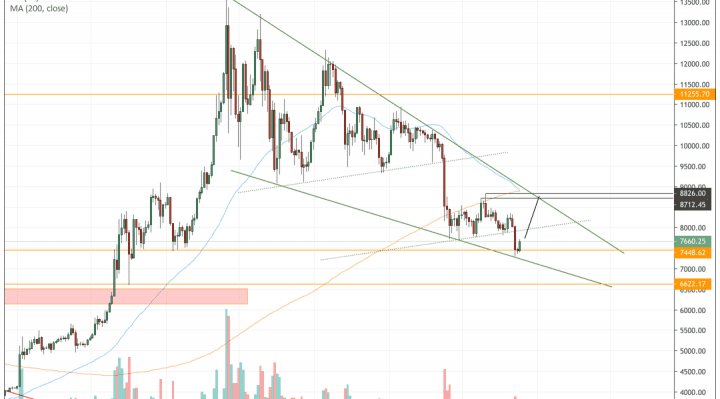 The range defined by $8,712-8,826 coincides aptly with the said upside target area. First, it is well within the scope of the Wedge area. Second, it corresponds to the area bitcoin lately tested as resistance. And third, the range is also concurring with the 200-daily moving average curve (in red) that has been capping bitcoin’s upside attempts since September 26.

The latest bounce back does not necessarily mean the returns of bulls to the bitcoin market. There is a higher probability for the cryptocurrency to test the upper trendline of the Falling Wedge pattern, only to correct downwards towards levels much lower than $7,000. Ideally, the upside target should bring ample Long opportunities while a pullback could have traders open Short positions towards the interim support targets.

A breakout, meanwhile, could appear only after bitcoin reaches the apex of the Falling Wedge. That means the price could likely fall towards the range of $6,500-6,622 before a major pullback. A breakdown, at the same time, could push bitcoin towards the $5,000-6,000 area.

Therefore, an early pullback from today’s intraday gains could have traders invalidate the Falling Wedge’s lower trendline support. It is also a breakdown, which means speculators would be targetting $6,500 as the next downside target.