Bitcoin Prepares for a Shaky Week as Trade Optimism Intensifies

Bitcoin is looking to tread through rough roads this week as the United States and China move their trade talks in a positive direction. 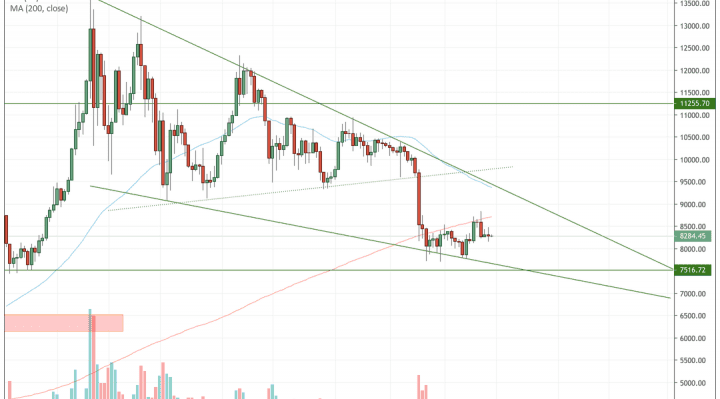 The benchmark cryptocurrency opened Monday on a choppy note, trading about 0.02 percent higher at $8,284.45 as of 0515 GMT. The move appeared as trade volume dwindled, showing how small traders are waiting for the big ones to decide the interim bias. But no new capital is moving into the bitcoin market as of late. That is because of investors’ focus on more significant markets, such as the equities and bonds, as they locate their bias against the trade talks, Brexit, and other macroeconomic factors.

There is no definite correlation between bitcoin and traditional stock markets. But the escalation of trade war earlier this year helped the cryptocurrency gain some recognition as a safe-haven asset. Particularly in China, where investors remain under strict state-imposed capital control laws, demand for bitcoin surged because of its non-sovereignty. It made the cryptocurrency an ideal hedge against a dwindling yuan and its derivatives.

In the second quarter of this year, bitcoin surged by more than 150 percent – also helped by the introduction of Facebook’s cryptocurrency ripoff, Libra. As the project became sore in the eyes of global regulators and governments, enticing even Donald Trump to make its first anti-cryptocurrency tweet, the price of bitcoin plunged by up to circa 45 percent from its year-to-date peak.

Since then, the cryptocurrency is attempting to find its grounds. It is trading in an area full of bias-conflict sentiments. At the same time, progress in trade talks is also taking potential investors away from it – at least, in the near-term.

My deal with China is that they will IMMEDIATELY start buying very large quantities of our Agricultural Product, not wait until the deal is signed over the next 3 or 4 weeks. THEY HAVE ALREADY STARTED! Likewise financial services and other deal aspects, start preparing….

What to Expect This Week?

A downside is more likely! The bitcoin price, as can be seen in the chart above, remains capped under the 200-daily SMA curve in red. Bulls have failed to break above it in their recent attempts, which is growing the bearish sentiment as each passes. Another week of attempting would expose bitcoin to more downside pressure.

Should it happen, the cryptocurrency could locate the next support at $7,500 before it attempts a bounce back towards the 200-SMA. An extended downside action would bring the $6,000-6,500 range in view.

Conversely, a break above the 200-SMA could push bitcoin towards the descending trendline of the Falling Wedge pattern in green.