Bitcoin ticked higher on Tuesday as investors assessed a rising trade and geopolitical conflict between the U.S. and China.

The benchmark cryptocurrency rose 1.31 percent to $9,016 on Coinbase crypto exchange. Its move uphill followed a broader short-term upside correction that started Monday. That allowed bitcoin to trade 3 percent higher on its weekly timeframe, especially after falling by close to 10 percent last week. 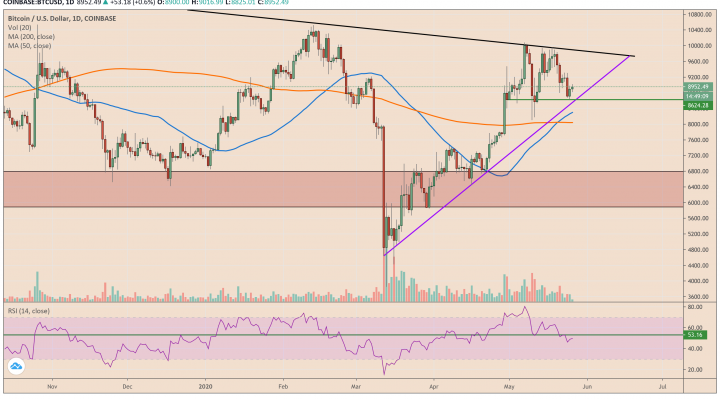 The moderate buying sentiment surfaced alongside a similar move in Gold markets. The yellow metal, which lately formed a positive correlation with bitcoin, inched 0.3 percent higher to $1,732.38 per ounce as of 0241 UTC. ING analyst Warren Patterson noted that Gold took its upside cues from the rising U.S.-China tensions.

“The key supportive factor for the (gold) market is rising tensions between China and the U.S.; and if we see a further escalation, we would see another move higher in gold,” he told CNBC.

The friction between Washington and Beijing started after President Donald Trump accused his counterpart Xi Jinping of mismanaging the coronavirus pandemic. Nevertheless, the last week saw the tensions taking a geopolitical route after China proposed a draconian security law in Hong Kong.

White House National Security Adviser Robert O’Brien said on Sunday that the U.S. could impose economic sanctions on China and Hong Kong. Beijing reassured a day later that its proposed law, which has stirred mass protests in Hong Kong and a sell-off in the local market, won’t hurt the business sector.

Investors typically move their capital to safe-haven assets amid distressing macroeconomic and geopolitical conditions. Bitcoin is an emerging hedging asset. It has a track record of rising against an escalating rift between China and the U.S. That partially explains why it recovered alongside gold this week.

The BTC/USD rate surged but on thin volumes. That does not confirm a breakout. Meanwhile, the pair continues to remain capped by a long-term Descending Trendline resistance near $10,000.

Bitcoin’s hourly chart confirms a weak upside outlook. The cryptocurrency is trending inside a Bear Flag, making higher swing highs and higher swing lows in a narrow trend range. The bearish pattern occurs in a downtrend that started after bitcoin tested $10,000 earlier this month. It indicators that the next break would be further to the downside. 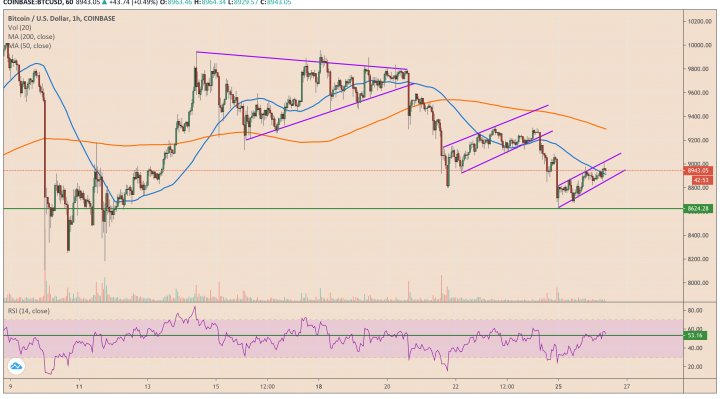 A break below the Flag support could have traders enter a short towards $8,624 with a primary downside target lurking near $8,100. Meanwhile, a break above the flag resistance could lead bitcoin to retest the orange wave – the 200-hourly moving average – that sits near $9,300.