Bitcoin closed a bloody week in anticipation of a recovery in the new one. But so far, its attempts have been inadequate.

The top cryptocurrency inched 1.49 percent higher to trade at $8,845 a token ahead of the London opening bell Monday. Its mild upside move came after a week full of massive sell-offs, started after a false rumor scared traders into panic-selling their bitcoin positions. 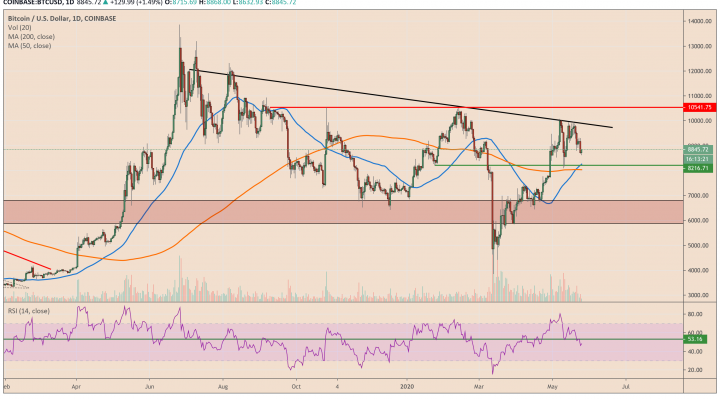 It started when an 11-year old bitcoin wallet moved about 40 BTC to an unknown address. Some thought it was Satoshi Nakamoto – Bitcoin’s pseudonymous creator – who transferred the tokens. And since he is believed to be holding about 1.1 million of early-mined bitcoin, traders anticipated a massive dump was incoming.

The price fell $500 in just 15 minutes on Wednesday and – since then – has failed to revive its short-term upside bias. Additionally, a weak buying demand near the $10,000-resistance controlled bulls from flourishing Bitcoin’s recovery.

Its latest decline has pushed Bitcoin towards a tight support area on a weekly chart. As shown in the table below, the cryptocurrency is attempting a pullback near its 50-week moving average (the blue curve). 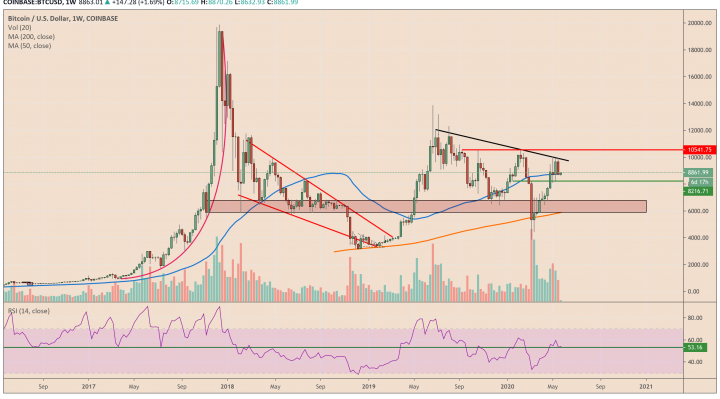 The blue wave has earlier supported bitcoin from falling further. At the same time, the cryptocurrency testing the 50-WMA coincides with its Relative Strength Indicator (RSI), which is testing its long-term support (green horizontal line). An RSI reading below 53 could mean an extended downtrend.

Therefore, bitcoin needs to hold a floor near the 50-WMA to retest $9,500-10,000 range. Otherwise, the cryptocurrency risks pushing the RSI below 53, leading to a negative slope. That would mean bitcoin falling below $6,000 – towards the 200-weekly moving average.

Meanwhile, a pullback to the upside followed by a breakout above $10,000 could improve bitcoin’s short-term bullish stance. That is a big call given the cryptocurrency’s latest rejections near the level, but targets levels above $10,500.