Monday’s Asian trading session has everything that could have pumped bitcoin to new yearly highs: a severe stock market crash in China, an injection of 1.2 trillion yuan ($173.8 billion) into China’s economy, and a lot of fears about the Coronavirus epidemic. But the benchmark cryptocurrency disappointed.

The bitcoin-to-dollar exchange rate was 0.74 percent down after the New York morning bell, trading at $9,254.63, driven mostly by profit-takers too bored to put an additional Long positon. The flip followed a jump towards $9,615.95 earlier today. But one has to say, the approx $300 upside move looked too manipulative to be true. 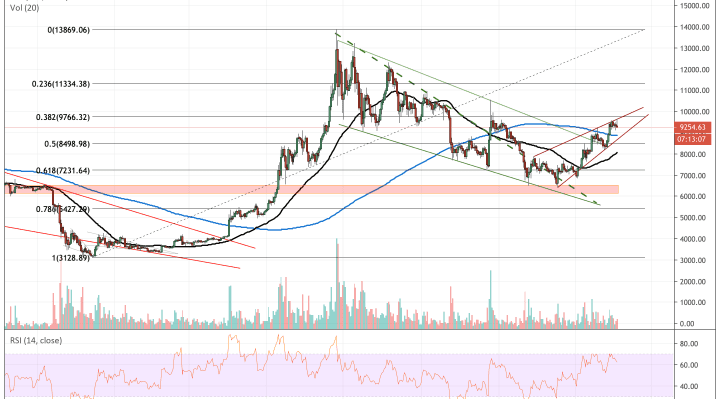 Overall, the pump-and-dump hinted that bitcoin was nearing a fresh bearish correction phase. Part of the reasons was it trending inside a Rising Wedge (redded converging trendlines), a traditional bullish reversal indicator.

The other reason was Gold, a rival asset which formed a positive correlation with bitcoin earlier in January, falling against improving US market sentiments.

An idiosyncratic asset, bitcoin appeared to have reacted to the tentative rebound in the European and US markets. Who needs a risky safe-haven when futures linked to the Dow Jones, Nasdaq, S&P 500, and Stoxx 600 were all screaming for some intraday gains?

Atop that, a stronger US dollar was also doing its best to maintain its bullish bias after the weekend’s downside move. And it did well.

Bitcoin had to suffer because the cryptocurrency looked too overbought on shorter timeframes. It gained circa 30 percent in January against the US-Iran conflict, low global economic forecasts, lower-to-negative interest rates, unresolved long-term trade wars, and Coronavirus.

Any break below those support levels could turn bitcoin into a loss-making machine. Best that traders wait for a retest towards $7,000, the primary downside target of the redded Rising Wedge.