Bitcoin edged lower for the third straight day and established a fresh weekly low, levels right below $9,200 during the late Asian trading session on Tuesday.

The benchmark cryptocurrency extended its ongoing retracement move from its local swing top established on Sunday above $9,600. Part of the plunge came on profit-taking. Other reasons that attributed to bitcoin’s fall included easing risk-on sentiments globally, as well as rival cryptocurrency tokens that appeared more bullish.

ICX, for instance, registered around 60 percent gains in the past 24 hours (data from CoinMarketCap.com). The ICON blockchain token’s upside move brought its two-week gains above 200 percent. That allowed traders to exchange a considerable portion of their bitcoin holdings for ICX.

The ICON/BTC exchange rate was up 61 percent on a 24-hour adjusted timeframe.

Coins like ICON could fall on profit-taking, which may move the capital back to bitcoin. Nevertheless, the top cryptocurrency needs a better-suited macro narrative to uphold its gains. As of now, the safe-haven sentiment is not working to its full potential.

Efforts by China’s central bank to handle the economic impact led by the Coronavirus outbreak has sent investors back to risk-on assets, such as equities. After a bulldozing fall on Monday, the stock market recovered Tuesday on such assurances. That also had a negative impact on Gold, bitcoin’s mainstream rival.

Meanwhile, investors also remained glued to the US dollar owing to a stronger-than-expected recovery in the US ISM Manufacturing PMI.

Bitcoin could now attract buyers at lower levels. But for that, the cryptocurrency has to fall further to attractive support areas, particularly the ones that behaved as resistance during its uptrend. 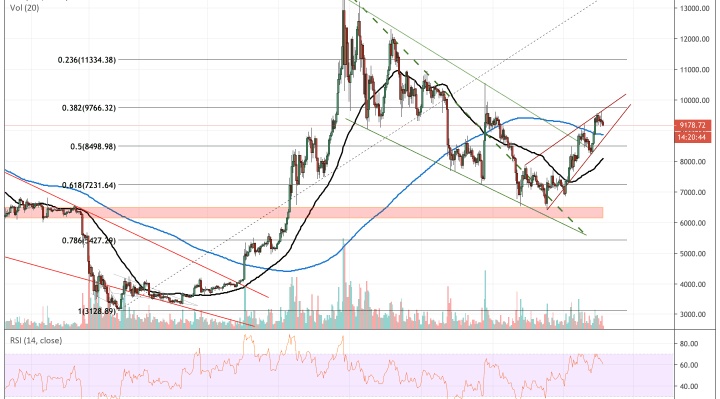 Such a move could have bitcoin shift its support-base to the 200-daily moving average (the blued wave). In a bull market, the cryptocurrency has historically remained above the 200-DMA. Traders can, therefore, treat it as an accumulation range.

On the other hand, a close below 200-DMA could trigger a sell-off until the price reaches the 50-DMA below (the blacked wave).