Bitcoin was among the only few investments that registered gains against the fears of the Coronavirus outbreak in China.

The leading cryptocurrency surged towards $9,500 during the Tuesday trading session, bringing its week-to-date profits up by 10.32 percent. At the same time, its monthly gains notched up by 32.28 percent, which made it the best performing asset heading into the year 2020. 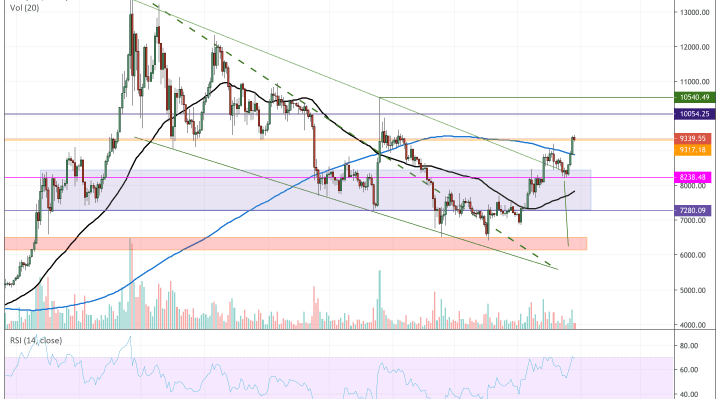 Bitcoin’s gains closely followed fears of the Coronavirus epidemic that killed more than 100 people and hospitalized close to 3,000 more in China and other parts of the world. Investors reduced their exposure from Asian stocks, causing a massive downslide. Global equities also suffered.

On the other hand, globally perceived haven asset Gold underperformed, sliding 0.9 percent during the Tuesday trade. Its move downward also showed its correlation break with Bitcoin – a coefficient that reached to its highest in years earlier this January amid the US-Iran geopolitical conflict.

Experts believe that speculators pumped the bitcoin price, thinking institutional investors would choose it as a safe-haven asset against the ongoing crisis. While there is no evidence that suggests big monies buying the cryptocurrency, the hype alone made it an extremely overbought asset.

Bitcoin’s gains also came against the backdrop of the fears of an economic meltdown. On Tuesday, the US Treasury yield curve inverted briefly for the first time since October. It left investors disquiet since the inversion typically precedes a recession.

Speculators treat bitcoin, a deflationary asset, as a defense against an economic crisis. The narrative alone could have helped the cryptocurrency register new 2020 highs.

Investors now await the outcome of the US central bank’s monetary policy meeting, which is due at 1900 GMT on Wednesday. The market believes the Fed could keep the benchmark rates intact in a sign similar to the European Central Bank.

Also, analysts see the central bank to continue its bond-buying program. It might leave investors with enough fiat liquidity to diversify into havens assets – which may include bitcoin.

On a technical ground, bitcoin has also strengthened its medium-term bullish bias via its latest move to the upside. The cryptocurrency is now above a key technical resistance defined by the 200-daily moving average. It now expects to grow above $10,000 to validate the breakout – or risk falling back.