Bitcoin was trading higher a day after the Federal Reserve Chairman Jerome Powell warned about a slow economic growth amidst rising coronavirus cases.

The London morning session was particularly interesting. The BTC/USD exchange rate logged a pump-like upside move as it breached above crucial resistance levels. The pair topped near $9,943 before profit-taking sentiment drove it lower by around $500. At its intraday low, it was trading at $9,257.

Target hit this morning, thanks for playing.

Bitcoin’s moves conflicted with a downbeat mood in the U.S. stock market. After closing 1.1 percent low yesterday, the S&P 500 continued its losing streak in the New York midday trade Thursday, falling 0.6 percent. Meanwhile, the Dow Jones and the Nasdaq Composite, too, plunged by 0.6 percent and 0.7 percent, respectively.

That also marked the second consecutive day wherein Bitcoin and the S&P 500 moved in the opposite direction. The two were trending almost in sync after falling back in March 2020.

In his speech Wednesday morning, Mr. Powell warned that the U.S. economy could take a longer time to recover. The Fed chair suggested the government to introduce additional stimulus packages atop its $3 trillion financial aid to shield the economy. He also alarmed investors about a wave of bankruptcies and higher unemployment cases.

Bitcoin managed a lucky escape on an otherwise gloomy day. Analysts convinced traders about the cryptocurrency’s safe-haven credentials in an economic crisis. A euphoric sentiment that came after “halving” also helped it sustain an upside bias for the near-term.

The BTC/USD exchange rate closed above $9,500 – a psychological support level – and managed to retest a long-term Descending Trendline. The pair formed a long upside wick towards $10,000 before returning to lower levels. The said top coincided with the 61.8% Fibonacci level as shown in the chart below. 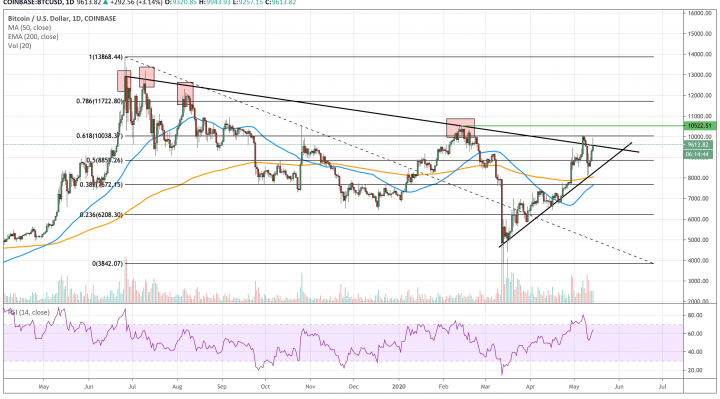 BTCUSD eyes a breakout while sustaining near a resistance junction | Source: TradingView.com, Coinbase

Technically, the RSI readings showed that bitcoin has more room to grow. If the cryptocurrency breaks above $10,000, then it could set its next primary upside target towards $10,500. By then, the RSI will have entered an overbought territory – a selling signal that would have traders $9,500-$10,000 as their support area.

Photo by Cam Adams on Unsplash