Bitcoin was modestly down in the early NY session after new data laid bare the US’s worst GDP contraction since World War 2.

The advance estimate showed that the US economy shrank at a yearly rate of 32.9 percent versus the anticipated 34.1 percent. The contraction came atop a 5 percent decrease in US GDP in the first quarter.

Away from the macro narratives, Bitcoin price edged lower on Thursday on profit-taking sentiment among daytraders. The cryptocurrency’s intraday correction did very little in negating its prevailing bullish bias. Even following a 1.07 percent drop–at press time–Bitcoin was up by more than 10 percent on a week-to-date timeframe. 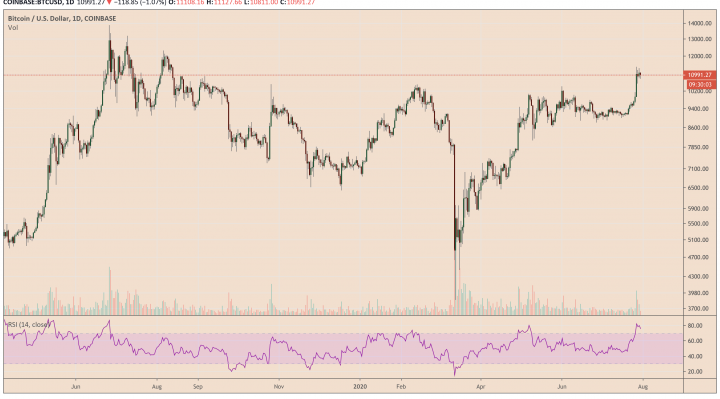 Bitcoin has fallen by more than 3.8 percent upon establishing a year-to-date high at $11,420 earlier this week. Source: TradingView.com

Anticipations for a Bitcoin rally has surged in the last two weeks ever since US real yields fell into the negative area. It showed that investors have grown fearful of inflation in the long-term – a sentiment that pushed gold, a traditional safe-haven asset, high towards its all-time high.

There is no evidence that shows institutional investors buying Bitcoin from spot markets. But a decade-long narrative, which projects the “scarce” cryptocurrency as a solution to central banks’ money-printing policies, helped push its price higher above $10,500. Bitcoin had failed to close above the said price ceiling for over 12 months.

According to Tyler Winklevoss, the co-founder/CEO of US-based Gemini crypto exchange, Bitcoin’s latest rally brought it closer to the fundamentals that drive the traditional markets. He tweeted:

“Bitcoin is starting to resonate with the world. If you pay attention, you can feel it.”

#Bitcoin is starting to resonate with the world. If you pay attention, you can feel it.

Thursday showed something similar. Bitcoin’s intraday correction almost coincided with a similar downside move in the gold market. Moreover, riskier Wall Street indexes also reported losses after the grim GDP report. On the other hand, the US dollar index posted a modest surge of 0.20 percent.

So it seems, investors parked their assets in cash or cash equivalents.

The short-term corrections in the Bitcoin market failed to shake-up its bullish bias. Ronnie Moas, the founder of Standpoint Research, projected the cryptocurrency as a better safe-haven alternative to Wall Street equities. He tweeted:

A more pessimistic outlook showed that Bitcoin may have to retest new short-term lows before it plans a rally towards $28k.

“What may even be worse is those who argue that Bitcoin and gold are strongly correlated,” wrote Christopher Inks of Texas West Capital. “Because if I’m right and gold is topping, then BTC must be topping as well.”