Bitcoin on Wednesday dropped by as much as 9.07 percent as it broke below a crucial support area of $7,500-$8,000. While many saw the plunge as an opportunity to buy perceivably-bullish bitcoin at cheaper rates, one skeptic thinks the downside sentiment would continue for a while. 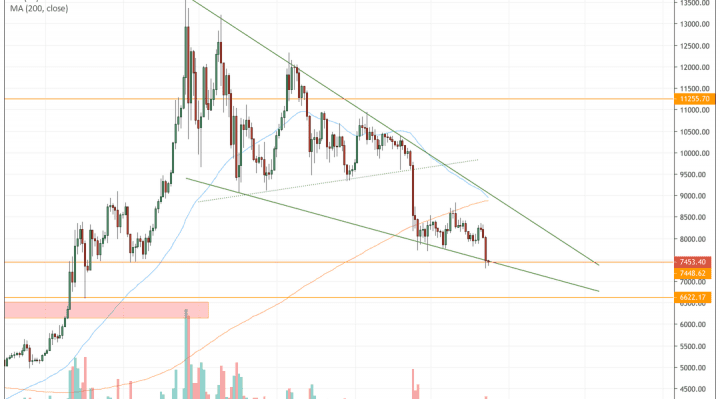 Bitcoin price dipped by more than 9 percent in a flash crash on Wednesday | Source: TradingView.com, Coinbase

Peter Schiff of Euro Pacific Capital, a US-based broker-dealer firm, said bitcoin would crash to as low as $1,000. The chief executive officer noted that the cryptocurrency is now heading to test $6,000 as its next support. The level last year was unable to hold the price as it fell to as low as $3,120. Further supporting the bearish buildup, as Schiff added, is a Head and Shoulder pattern that was forming over the weekend.

The Bitcoin chart looks horrible. Not only does the flag that followed the recent breakdown project a move to $6K, but we are close to completing the right shoulder of a head and shoulders top, with a $14K head, and neck line just below $8K, that projects a collapse to below $2K!

“Not only has Bitcoin broken out of its bear flag pattern, projecting a move to $6K, but the head and shoulders pattern that I mention was forming over the weekend has now been confirmed as well,” said Schiff. “If this pattern completes it projects a much larger decline, perhaps as low as $1K.”

Meanwhile, other analysts had more generous downside targets for bitcoin. While admitting that the cryptocurrency is in a bearish bias, Nunya Bizniz said it could fall as low as $5,000. The analyst cited a descending triangle breakdown to back his claim. 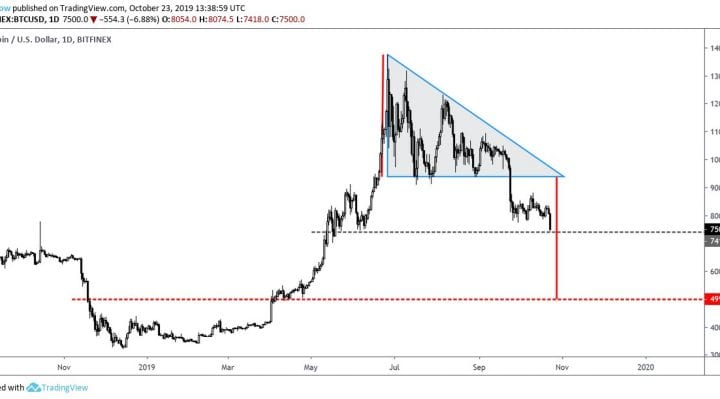 Bitcoin eyeing $5,000 as the next pullback target | Source: Nunya Bizniz

“The goal of the descending triangle’s measured move is about $5K. It aligns perfectly with prior support,” said Bizniz.

Nevertheless, before the bitcoin price gets to test the $5,000 level, it would need to break below an intersection of horizontal and diagonal trendlines, as seen on the weekly timeframes. The sideways level coincides with the $7,300 level that bitcoin nearly tested during Wednesday’s flash crash. Below the said support, the only thing standing before $5,000 is the psychological support offered by the $6,000 level.

Will this intersection offer support?

Stop asking me questions and just tell me what's going to happen. pic.twitter.com/6w2SbAFDjZ

Bulls continue to watch updates on a macroeconomic scale to understand where the next bitcoin bias lies. Gabor Gurbacs of VanEck thinks global market fundamentals could push the cryptocurrency higher. The digital asset strategist said on Wednesday that the Federal Reserve’s plan to add more liquidity per day to repo markets would make the US dollar less-attractive. He hinted it would benefit bitcoin, a non-sovereign asset, down the road.

“The Fed to add *$120 billion* liquidity *per day* to repo markets. That is a massive 60% increase in the overnight repo liquidity availability (from $75 billion to $120 billion). Bitcoin’s market cap is $135 billion. Think about it for a moment.”