This section will discuss CFD trading tips and strategies for beginners. This article will present some simple tips that traders who are starting CFD trading for the first time can deploy to get successful results from their activity. It will also present a simple way of looking at the market, and end by presenting a simple strategy that can be used to trade CFDs.

What are CFD trading strategies ?

CFD trading strategies A set of rules guiding trade entries and exits which are meant to enable a trader to profit from a series of trades without jeopardizing the account capital. By this definition, risk management is an integral part of a trading strategy set up.

The CFD trading strategy setup we shall use today will deploy the use of chart patterns as the technical setup. The technical setup will be used to initiate trade entries and exits in the direction of the fundamentals at play within the asset.

The use of chart patterns in trading is a consequence of the cyclical nature of the markets. A tenet of technical analysis states that history tends to repeat itself.  so if you see price setting up in a particular way in order to form a pattern, it is likely that the same result that was obtained previously will repeat itself.

However, trading a pattern successfully requires that you understand the price structure and you also understand the principles of price breakout/breakdown. You should also have an idea as to how to project the extent of price movements following the exit from the pattern. This enables you to take profit appropriately without having the market go against your position when such targets have been reached.

Flags and pennants describe two variations of a similar-looking pattern, with the only distinction being that the consolidation area that follows the initial price moves forms a channel in the flag, and a triangle in the pennant. Each pattern has a bullish and bearish variety.

The challenges with using this strategy usually change on setting appropriate entries and exit points. 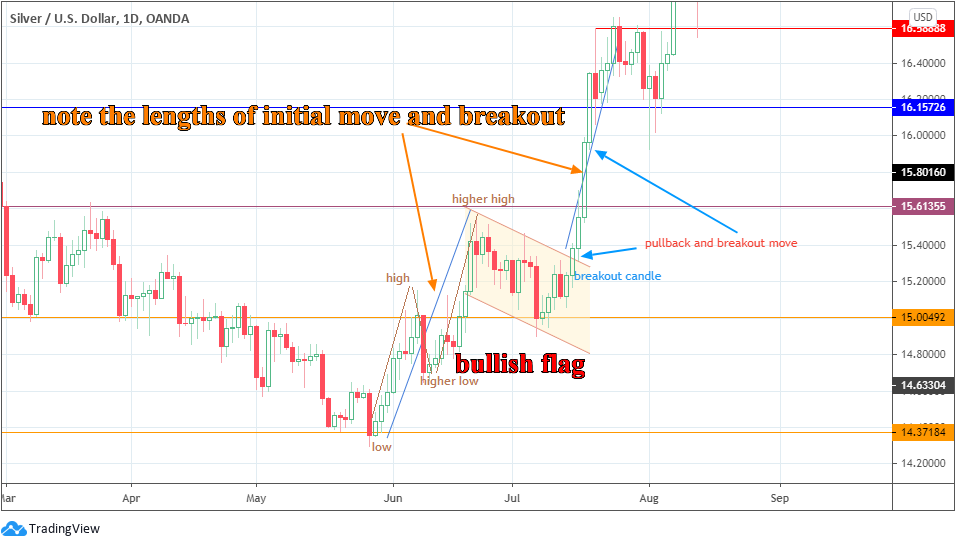 Look at the flag pattern above. This chart illustrated a number of things.

The stop-loss can then be set at a few pips below the price barrier that has been broken while the Take Profit target is set by projecting the number of pips that formed the initial trend in an upward direction.

This pattern has a bearish variety as well and the pennants can also be traded using the same principles.

Tips to Trading CFDs With This Strategy