EURJPY has formed higher lows and higher highs to trend higher inside a rising channel on its 4-hour time frame. Price is currently testing the channel top and might be due for a drop back to support next.

The 100 SMA is above the 200 SMA to signal that the path of least resistance is to the upside. In other words, resistance is more likely to break than to hold. Then again, the gap between the indicators is narrowing to reflect weaker bullish momentum and a potential crossover. In that case, price could retreat to the channel bottom around 120.50 to 121.00.

RSI is turning lower after indicating overbought conditions or exhaustion among buyers. This signals that sellers are taking over and could have enough energy to take price back to nearby support areas. Stochastic is also on the move down, so price might follow suit, even just until the mid-channel area of interest. 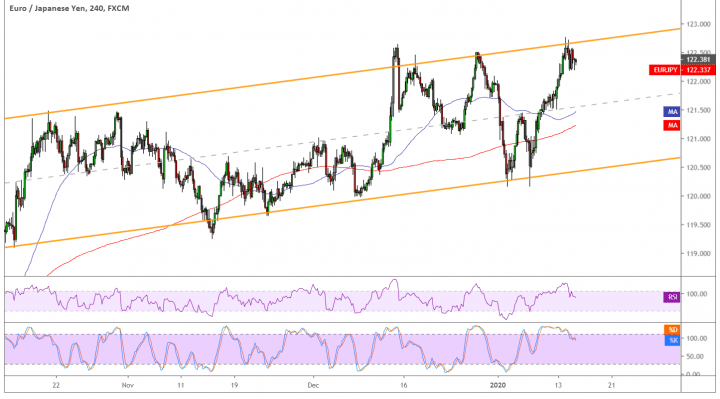 The minutes of the ECB meeting are up for release this week, and this should show how most policymakers are leaning towards dovish moves. Chairperson Lagarde also has a speech coming up that might contain some clues on what the central bank’s next moves might be.

Earlier in the week, BOJ head Kuroda mentioned that he’s open to the idea of further policy easing, especially if inflationary pressures don’t pick up. This could put more upside pressure on the pair and spur a channel break higher, which might then be followed by a steeper climb.

Then again, any return in risk aversion could bring yen bulls back in the game and allow this countertrend opportunity to gain traction. Among the risks include US-China trade talks and a potential escalation of the conflict in the Middle East.