GBPCAD is trending lower on its 4-hour time frame as it formed lower highs and lower lows inside a descending channel. Price recently bounced off support and might be ready for another test of resistance.

Price seems to be finding resistance at the 50% Fibonacci retracement level around the 1.6950 minor psychological mark. However, the mid-channel area of interest is also holding as support and might keep GBPCAD on its way up to a higher resistance level.

The 61.8% retracement level is in line with the channel top and close to the 1.7000 major psychological mark. This is also around a former support level that might hold as resistance moving forward.

The 100 SMA is below the longer-term 200 SMA to indicate that the path of least resistance is to the downside. In other words, the selloff is more likely to gain traction than to reverse. The gap between the indicators is slowly widening to show that bearish momentum is picking up. 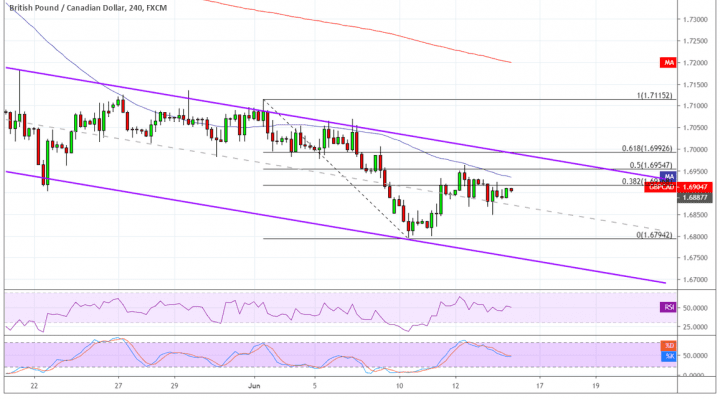 The Loonie is under pressure on account of weakening oil prices, but there could be a chance for a rebound as Middle East tensions are picking up. Meanwhile, the pound is still on weaker footing on account of Brexit uncertainties, particularly the likelihood that the new Prime Minister might be more open to the idea of leaving the EU without a deal.

There are no major catalysts lined up from both the U.K. and Canada for the rest of this week, which could also leave market sentiment as the main driver of price action.