NZDJPY recently broke above the neckline of its double bottom visible on the daily time frame, confirming that a reversal from the earlier slide is due. The chart pattern spans around 300 pips in height, so the resulting climb could be of at least the same size.

However, the 100 SMA is still below the 200 SMA to indicate that the path of least resistance is to the downside or that the selloff is more likely to resume than to reverse. Then again, price is already trading above the 100 SMA as an early indicator of bullish pressure, and the gap between the indicators is narrowing to reflect weaker bearish pressure. 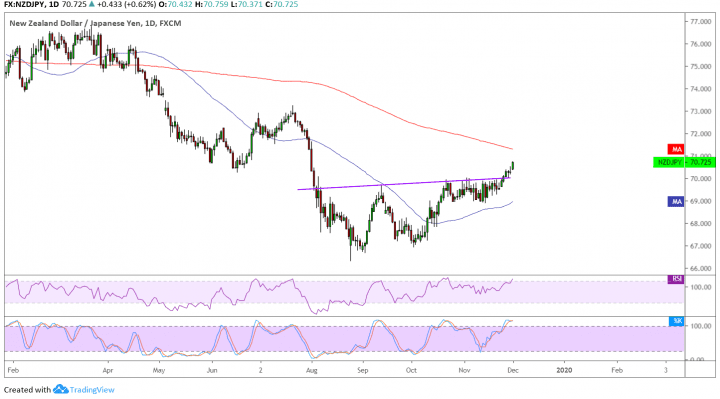 The Kiwi enjoyed the pickup in risk appetite from the previous week as geopolitical risks eased. On the flip side, the lower-yielding Japanese yen has been on the back foot as traders put their holdings in higher-yielding assets and currencies instead.

Trade talks between the US and China seem to be progressing while election-related polls in the UK suggest a comfortable lead for the Conservatives, which would then be positive for PM Johnson’s Brexit plans. The vote in Hong Kong also eased concerns in the Asian market somewhat, although doubts remain that the relative calm could last long.

Also, data from New Zealand has been mostly upbeat, dousing hopes of more RBNZ cuts for the rest of the year. Meanwhile, easing expectations remain in play for the BOJ as Japanese data has been disappointing.