A set of fundamental and technical indicators show that Bitcoin hitting $25,000 by 2021 is indeed possible.

For a recap, the benchmark cryptocurrency has surged by close to 11,000 percent in its eleven-year lifetime. The period has seen BTC/USD hit a $20,000 valuation just three years ago. It has also witnessed the pair going through a fifteen-month long bear market.

The massive price fluctuations–caused both by reasonable speculation and shady manipulations–have not deterred Bitcoin from its long-term upside path. As of today, the cryptocurrency was trading 63 percent higher on a year-to-date timeframe. Its performance has even left the traditional markets–such as Gold and the S&P 500– behind.

Now, given the catalysts that surround Bitcoin, the cryptocurrency promises to go further higher in the sessions ahead. Different popular models predict that it would easily surpass its previous milestone of $20,000. FxDailyReport has also curated some theories to back those overly bullish predictions.

Placing Bitcoin’s weekly performance on a logarithmic chart shows the cryptocurrency trading inside a giant Ascending Triangle. It is a bullish continuation pattern that typically forms during an asset’s uptrend. It indicates accumulation and, if broken to the upside, results in massive bullish rallies. 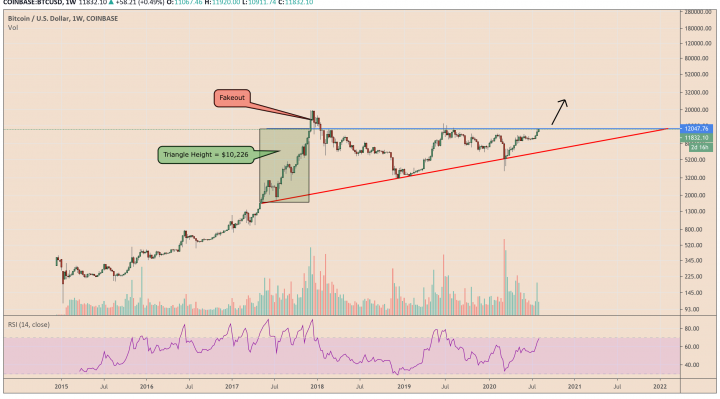 BTC/USD is currently testing the top horizontal line of the Triangle. As one can notice, traders have so failed to push the pair above it, except a December 2017 price rally towards $20,000. But even then, the breakout quickly faded away on high profit-taking sentiment, later sending the price to as low as $3,100.

Under the current circumstances, there is a higher probability of Bitcoin breaking above the said resistance.

A recession has begun in the wake of the coronavirus pandemic. Unemployment rates in the US have breached the Great Depression levels. And in the middle of the economic slowdown, the Federal Reserve is keeping its benchmark rates near zero while committing trillions of dollars to purchase Treasury and corporates bonds.

The US government, on the other hand, is in the process of finalizing its second stimulus bills to aid millions of Americans. Earlier, it passed a $2 trillion relief package.

Overall, the outcome of this massive funding exercise weighs down upon the US dollar and bond yields. That has sent investors to the safety of riskier assets, including gold, equities, silver, and even Bitcoin.

Should these factors continue to play out until 2021, then it may keep upward pressure on the asset market. Therefore, Bitcoin may end up benefitting from the higher safe-haven bids.

Such fundamentals could push the cryptocurrency above the Triangle’s horizontal line. In that case, the resistance will turn into support – a strong footing from where BTC/USD could continue heading higher.

Meanwhile, the ideal upside target for the pair would be as much as the maximum height of the triangle. It is nearly $10,228 for now.