Peter Schiff Boasts as Bitcoin Sheds $950 in a Day

Legendary gold bull Peter Schiff has doubled up his attacks on Bitcoin, a non-sovereign cryptocurrency projected as safe-haven to the current generation of institutional investors.

The Euro Pacific Capital CEO on Wednesday said bitcoin had failed as a hedging asset, recalling the cryptocurrency’s performance against a poorly performing global stock market last week. He noted that bitcoin dropped massively in tandem with global equities, proving that no investor took refuge in what speculators considered an emerging safe-haven alternative to gold.

The statements followed bitcoin’s poor performance at the spot market this Wednesday. The cryptocurrency lost about $950, or 9.23 percent, to fall towards the $9,300 mark for the first time in the last 30 days. Around the same time on Wall Street, the benchmark S&P 500 closed the day on 0.7 percent gains as energy shares surged. 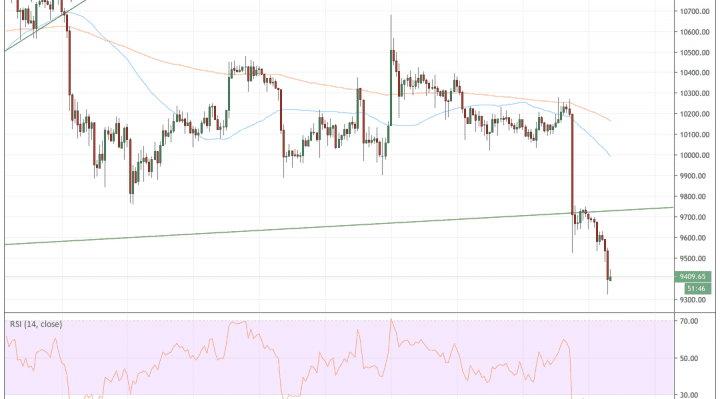 Bitcoin drops massively in the past 24 hours | Source: TradingView.com, Coinbase

Schiff’s pet asset Gold appeared on better terms with investors. The yellow metal opened higher on Thursday Asian session and hovered around record highs. Its spot price rose 0.2% to $1,542.06 per ounce, as of 0331 UTC as investors feared recession and the outcome of US-China trade war. Schiff treated the surge as a testament of lower demand for BTC, stating:

“Since last Thursday Bitcoin has lost more value than any of the major stock market indexes, while gold and silver have gone up. You can keep looking in the rearview mirror while ignoring what’s happening right in front of you.”

Prominent market analyst Josh Rager noted that bitcoin is now down for the third week in a row, which is similar to how the cryptocurrency showed three weekly downturns in a monthly upside action.

“Last uptrend Bitcoin has multiple months with at least 3 down weeks in a row. Price is near weekly support & on a weekly perspective. I want to see BTC close above $9,533 Sunday or it would form a lower-low.”