The US dollar is slumping against many currency rivals in the middle of the trading week as the Federal Reserve’s unlimited quantitative easing program and Washington’s $2 trillion stimulus efforts weigh on the greenback. Mixed economic data failed to alleviate pressures on the dollar.

The federal government once again delayed passage of the astronomical $2 trillion stimulus package as Congress continues to clarify language in the bill. But leaders in both parties say the deal is as good as done. This sparked the second consecutive day of huge gains for the leading US stock indexes. Once the legislation is signed by President Donald Trump, it would complement the Federal Reserve’s aggressive monetary actions, including unlimited quantitative easing and 0% interest rates.

On the data front, the IHS Markit manufacturing purchasing managers’ index (PMI) came in at 49.2 in March, down from 50.7 in February – anything below 50 indicates a contraction. The reading was better than the 42.8 median estimate. The services PMI plummeted to 39.1 this month, down from 49.4% in February.

New home sales tumbled 4.4% last month, down from the 7.9% gain in January. The market had penciled in a drop of 2%. The January housing price index edged up 0.3%, down from 0.7% in December. According to the Mortgage Bankers Association (MBA), mortgage applications cratered 29.4% in the week ending March 20. 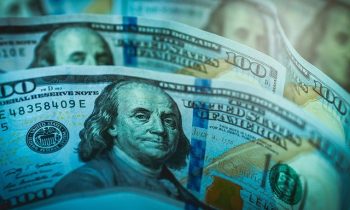 Last month, durable goods orders surged 1.2%, up from the tepid 0.1% gain in January.

All eyes will be on Thursday’s initial jobless claims report that is anticipated to clock in at more than one million, though some experts say it could hit the two-million mark. The fourth-quarter gross domestic product (GDP) growth rate, wholesale inventories, and the personal consumption expenditure index will also come out on Thursday.

The US bond market experienced an interesting development on Wednesday morning: the one- and three-month Treasury notes slipped into negative territory to -0.03%. This did occur more than four years ago, but it was a blip and it only hit -0.002%. It could be easy to blame the negative-yielding bond on the central bank, which slashed interest rates to 0% a week, but experts say it is more of a demand issue.