Bitcoin bounced off support as expected and is now setting its sights back on the channel resistance while the uptrend resumes. Applying the Fibonacci extension tool shows how high BTCUSD could go from here.

Price is currently testing the 38.2% extension around the $2700 level, which is a short-term area of interest and could have a lot of take-profit orders. A break past this area could lead to a test of the $2800 major psychological resistance next or a move to the $2850 mark at the channel resistance.

Stronger buying pressure could lead to a move closer to the full extension just above the $2900 mark or a steeper climb all the way up to the record highs close to $3000. The 100 SMA is above the longer-term 200 SMA so the path of least resistance is to the upside.

In other words, the uptrend is more likely to carry on than to reverse. However, if another correction is due, bitcoin could still test the channel support near the 100 SMA at $2650. A larger correction could find support at the 200 SMA dynamic inflection point, but a break below this last line of defense could mark the start of a downtrend. 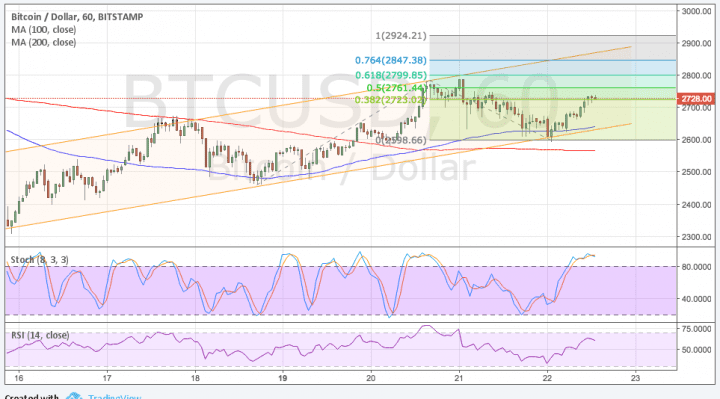 Stochastic is already indicating overbought conditions, which means that buyers might want to take a break soon and let sellers take over. RSI has room to head north before hitting the overbought area so there’s some bullish pressure left. Once both oscillators turn lower, sellers could get back in the game and push bitcoin back down.

A number of positive reports have buoyed bitcoin higher in the past few hours once more, including headlines that India’s government is looking into regulating the cryptocurrency. This could be encouraging for startups and investors as it would increase the legitimacy of bitcoin.

Also, news that a bitcoin wallet startup Blockchain has raised $40 million from Google’s investment arm has reminded market watchers of the potential of both the cryptocurrency and its ledger. According to CEO Peter Smith, they will use these funds to expand operations in other countries.