Bitcoin Plunge Continues below $7,000; Is Breakdown Near?

Bitcoin started the week in negative territory as price retested its six-month low in the latest downside move.

The benchmark cryptocurrency established a new intraday low of $6,526 after sliding by more than 5 percent on Monday. The price action strengthened bitcoin’s interim bearish bias, extending its net price correction to 38.09 percent, as calculated from the local high of $10,540.59. 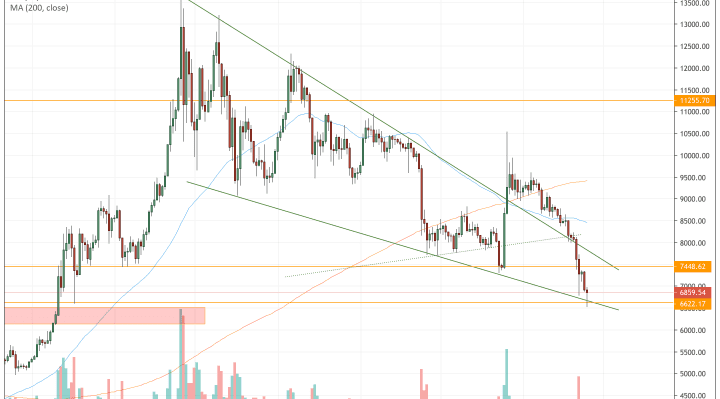 Elsewhere in the cryptocurrency market, the assets followed bitcoin’s depressive cue. Ethereum, the second-largest cryptocurrency by market cap, though surged by 1.80 percent on Monday but remained locked inside a downside parabola. As of today, it was down by more than 34 percent from its local top of $199.50. Ripple’s XRP, which held firm against a weaker bitcoin lately, also gave up its November gains. The XRP/USD pair fell by circa 37 percent from its local high of $0.3179.

On the whole, the cryptocurrency market cap has lost up to $96.7 billion in total since October 26.

Gabor Gurbacs of VanEck – a New York-based investment management firm, today guessed a number of reasons that may have contributed to the falling of bitcoin. The Digital Asset Strategist stated that China’s crackdown on peer-to-peer bitcoin marketplaces scared investors to renter the market at lower prices. He also noted that people may be keeping a distance from the bitcoin market owing to arbitrage their tax losses ahead of 2019’s conclusion.

But, according to FT Alphaville’s Jemima Kelly, most of the analysts don’t even have a clue behind bitcoin’s latest downside move. The author also noted that the cryptocurrency’s plunge proved further that investors are not treating it as a safe-haven asset against a string of poor macroeconomic indicators.

Celebrated market analyst Alex Krüger believes the same. The economist reminded on Sunday that all the factors that could have pumped bitcoin to new highs this year had faltered. He specifically mentioned the central bank’s dovish policies, such as quantitative easing, that many projected as bullish for bitcoin, reminding that the cryptocurrency had fallen by more than 30 percent even since the US Federal Reserve started expanding its balance sheets.

Fantastic narrative.$BTC is down 30% since the Fed started expanding its balance sheet in August. Big facts. pic.twitter.com/byhWrdslGG

“Added liquidity can only help price, but [bitcoin] doesn’t respond to macro variables,” Krüger tweeted. “It is such an illiquid/fragmented market that in the absence of mass influx of new buyers, actions of a few determine direction. Micro, not macro.”

Alex Saunders of Nuggets News pointed out in his tweet that more and more traders were increasing Short exposures in the bitcoin market. The chief executive noted that on derivatives exchange BitMEX, Short positions outran Long ones by almost 5 percent. Meanwhile, on Binance, the gap was almost 70 percent wide, with Shorts having the maximum exposures.

CoinStats.app, a cryptocurrency portfolio management app, found similar results in its survey. Their daily poll found that 75 percent of their hundreds of thousands of users are interesting in selling their Bitcoin. Only 18 percent want to buy the dip while the rest want to hold the tokens.

Analysts are now watching $6,500 as a potential support target.