Bitcoin price climbed 1.46 percent to $9,654 in the last 24 hours, but its uptrend showed signs of weakness amid a less-enthusiastic trade volume. 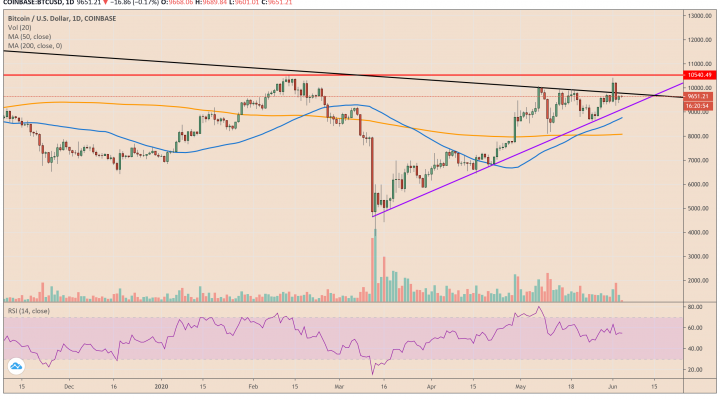 The halted recovery trend followed Bitcoin’s second-biggest daily decline on a 30-day timeframe. The cryptocurrency on Tuesday plunged by 6.72 percent after failing to hold its gains above $10,000, a healthy resistance level. Observers blamed capitulation at the end of miners for the said intraday crash.

But the plunge further appeared like a bearish fractal on repeat. Bitcoin has repeatedly failed to close or sustain above $10,000 in 2020. Additionally, a long-term descending trendline (black) with origins dating back to December 2017, is also acting like a double-layered price ceiling for the cryptocurrency.

While the price can still march upward, but it will most likely face the same trendline. That would follow another pullback that could extend beyond $8,600-9,300 – bitcoin’s current support zone. Meanwhile, traders may watch the rising pink trendline as an interim price floor for a potential upside pullback.

The bitcoin market is seeing a corrective action also as economic optimism improve around the globe. DailyFx currency strategist Ilya Spivak told CNBC that investors’ risk appetite is increasing as the economies reopen after the coronavirus-induced lockdown. That has helped global equities rise four-days in a row.

Bitcoin so far recovered alongside the risky stocks but the latter promises investors lesser risks and lower price volatility. That may be one of the reasons why Bitcoin’s uptrend has slowed down near $10,000.

There is also a section of traders that believes the cryptocurrency will rise.  Their argument is the rising tensions between the U.S. and China over Beijing’s new draconian security law in Hong Kong. A similar conflict last year had led bitcoin prices higher by more than 150 percent.