A run-up in the bitcoin price last week fizzled as investors digested the prospects of stimulus measures in major economies. 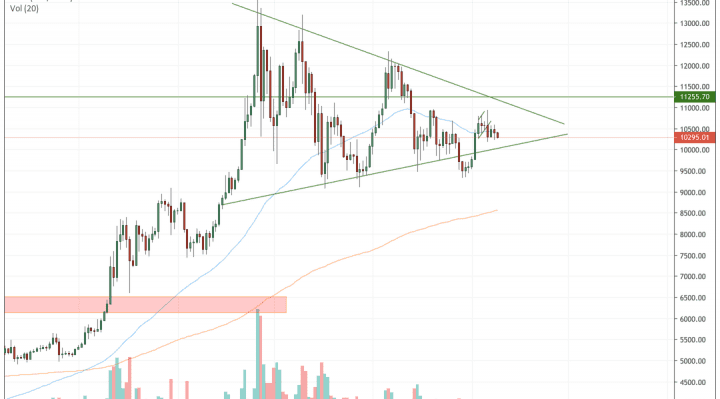 The bitcoin drop appeared to have more to do with technicals than fundamentals. Ideally, the benchmark cryptocurrency is going in the right direction, with Intercontinental Exchange-backed digital assets platform Bakkt and Fidelity Investments set to launch their bitcoin derivatives this month. Bitcoin also remains one of the most profitable investments in 2019 against a gloomy macroeconomic outlook set by an ongoing US-China trade tension and recession calls in some of the biggest world’s economies.

On the technical front, however, bitcoin is stuck inside a triangle pattern with stubborn parameters on each side. The so-called symmetrical triangle has capped the price from achieving a full-fledged breakout. It typically puts bitcoin in a medium-term bias conflict. According to many analysts, bitcoin would break to the upside eventually, going by its prevalent price behavior before the ongoing consolidation occurred.

As bitcoin guesses its interim bias, investors are already weighing-in the prospects of China’s decision to introduce stimulus measures in the face of slugging economic growth. On Friday, the communist state said that it would go easy on banks to allow them to lend more. Stocks in China surged higher on the news, with CSI 300 Shanghai- and Shenzhen-listed stocks recording a decent 0.4 gain.

Meanwhile, in the west, the US Federal Reserve Chairman Jerome Powell said on Friday that his office would act “act as appropriate to sustain the expansion.” The market is expecting stimulus programs from the chair as US job growth slows down to its three-month low in August. S&P Futures looked stronger on the news, showing the benchmark index could open 0.2 percent higher on Monday.

Bitcoin, meanwhile, waited on the sidelines as investors decide whether they want to take opportunities in risk-on assets or maintain their holdings in safe-haven assets. As an emerging hedging instrument itself, bitcoin is promising to attract more capital as investors lose confidence in the global stock markets.