Bitcoin Sells Off at $12K Again; What to Expect Moving Forward

Bitcoin slipped in the early Tuesday session after breaking above $12,000 a day before.

The sell-off occurred on profit-taking sentiment. Traders who were looking to secure short-term gains out of Bitcoin’s recent upside move sold their positions at local highs. That caused the cryptocurrency to correct lower below $12,000 for the second time in seven days.

The downside pressure also matured on rising Treasury yields and a firmer US dollar. Investors returned to the safety of the greenback after China slapped sanctions on some US officials. That further escalated already-brewing tensions between Washington and Beijing.

Bitcoin has been moving in the opposite direction of the 1o-year bond yield and the US dollar since March 2020. The cryptocurrency’s 200 percent rally from its year-to-date nadir coincided with the yield falling near 0.5 percent and the greenback crashing to its two-year low. 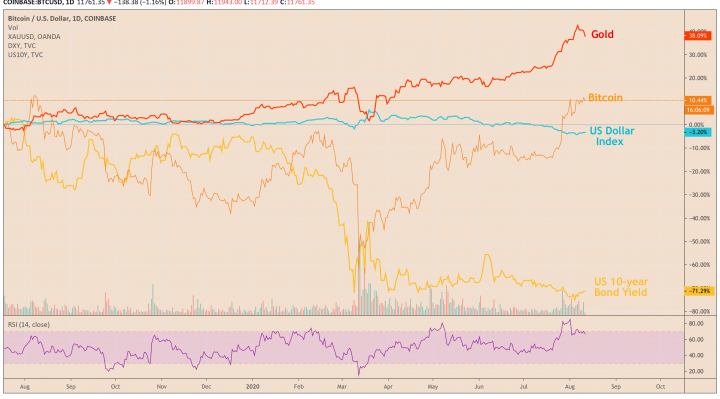 BTC/USD’s bull run is now at the risk of facing more challenges if the US dollar shows signs of further strength. Meanwhile, traders are also focusing on the release of the next US stimulus package. That could lead to uncertainty in the dollar market, which has historically pushed the Bitcoin price higher.

Also, real yields–called Treasury inflation-protected securities–on the 10-year sovereign bond is now around minus 1.05 percent. That has further kept investors glued to anti-inflationary assets such as gold. Bitcoin, thanks to its fixed market supply of 21 million units, is also serving as an attractive destination for haven-hungry traders.

Phi Deltalytics, a crypto-focused market analysis firm, said in a note published Monday that Bitcoin could fall back towards $10,500 purely based on technical factors. The portal, nevertheless, recognized a higher buying sentiment near the said level that could push Bitcoin higher all over again.

“Institutional investors showed picked up interest in the crypto space as Grayscale raised $900M in Q2 (its ATH quarter since inception),” it wrote. “For the short-term, institutional traders on CME is finding support at 11k.”

On a short-term basis, Bitcoin is looking for a pullback move in the coming hourly session ahead. The cryptocurrency today fell towards the lower trendline of its Rising Channel support, a level that earlier showed a higher buying sentiment among traders, as shown in the chart below. 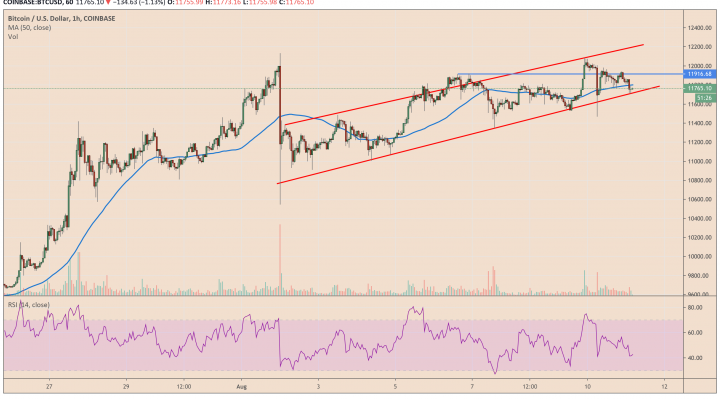 Bitcoin eyes a retest of $12K on its next upside move. Source: TradingView.com

Should a bounce-back occurs, BTC/USD would test $11,918 as its next upside target. An extended move above would push the price back towards testing $12,000 as its resistance level. Meanwhile, the channel’s bull target is lurking above $12,200.

Conversely, failing to bounce back from the Channel support would push Bitcoin towards $11,500, a historical support level. If the downside appears as a long Wick, then there is a likelihood of it being a fake breakdown. Meanwhile, a convincing bearish move below the support could take the price as low as $10,500.