Bitcoin extended its price recovery this Friday after plunging by more than 50 percent last week.

The top cryptocurrency surged 13.04 percent to top at $6,990 after the European morning bell. It faced higher selling pressure around the intraday high, eventually falling down by $658 heading into the US session. Traders managed to keep the price above the $6,300-6,400 range. 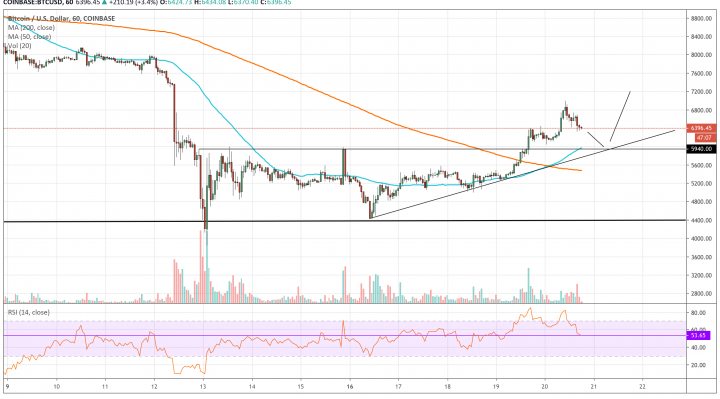 The bitcoin-to-dollar exchange rate on Coinbase was apprehensively approaching short-term ascending trendline support for a potential pullback. The trendline also met another key price floor at $5,940 – roughly $6,000 – that earlier this month behaved as resistance to bitcoin’s sideways consolidation.

The confluence of two different supports served as an ideal opportunity for traders to enter a bullish bitcoin position. But breaking below the floor also raised the possibility of a breakdown towards $5,000-$5,050 area.

Experts in the cryptocurrency market are hopeful of bitcoin to continue the upside momentum. Anonymous full-time trader Insider Moon noted that while bitcoin fell almost in sync with the global financial market, its recovery nevertheless was among the most attractive ones up until Friday.

“Bitcoin basically made a 2X recovery from the bottom with the burst near $7K earlier,” he wrote. “Only asset/company on the planet that can collapse -50% overnight on pandemic news and bail itself out with no intervention.”

The analyst was referring to the central banks’ intervention to safeguard their economies from the worsening Coronavirus pandemic crisis.

The US Federal Reserve, Bank of England, the European Central Bank, Bank of Japan, and others introduced new economic stimulus programs ranging from injecting hundreds of billions of dollars into the banking system to cutting benchmark lending rates to near or below zero.

Treasury Secretary Steven Mnuchin sees the proposed Senate Republican stimulus measure as too small in some areas and wants it to include direct payments to more individuals https://t.co/dnV4NOkU3S

The fiat packages helped global markets recover a little from the overall rot. Nevertheless, demand for cash remained higher as governments asked/ordered people to lock themselves up in their homes to contain the virus. As a result, investors strategized to sell safe-havens to extract their interim or long-term profits, causing plunges in gold, bitcoin, and even bond markets.

Bitcoin’s deeper pullback after topping at $6,990 showed the cryptocurrency handling extreme volatilities. So it appears, traders attempted to liquidate their positions for short-term profits instead of targetting broader upside levels.

It is now up to bulls to sustain above the $6,000 to start a new wave of buying rounds. Should that happen, the cryptocurrency could be eyeing a run towards $8,000.