Bitcoin Stuck Below $9K as U.S. Stock Futures Go Up

Bitcoin fell back below $9,000 in the early morning trade Wednesday as investors shifted focus on more profitable U.S. equities.

As of 0750 GMT, the benchmark cryptocurrency was trading at $8,850.64, down circa 2 percent from its local top. The price reversed its short-term uptrend amid a weaker buying sentiment near $9,000. The mood prompted day traders to sell the high and wait for bitcoin to establish a new support level to reenter the market. 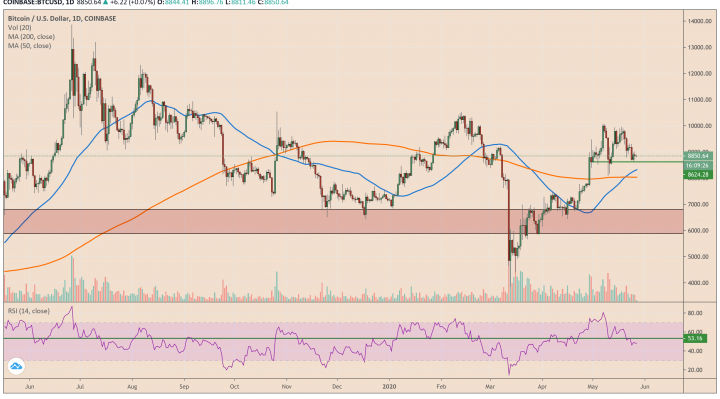 That raised the possibility of the cryptocurrency to retest an interim support floor near $8,624 while maintaining focus on the 50-daily moving average (the blue wave) as its primary downside target. At the same time, a pullback from $8,624 accompanied by higher volumes could mean a go at $9,500.

But as technicals point to a bias conflict scenario, a macro narrative is giving a more pessimistic signal.

The losses in the Bitcoin market appears in contrast to moves in the U.S. equities. The benchmark S&P 500 index closed Tuesday 1.23 percent higher to 2,991.77 points on upbeat investors’ sentiment. The risk-on mood took its cues from a recovery in the economic activity after coronavirus-induced lockdown.

Futures linked to the S&P 500 were also up 0.6 percent, suggesting that the U.S. markets could move further higher after the New York opening bell on Wednesday. Steve Englander, head of North America macro strategy at Standard Chartered Bank, told WSJ that investors are anticipating that the worst of the coronavirus pandemic has passed.

The sentiment is pushing the S&P 500 away from Bitcoin after it sustained a positive correlation with the cryptocurrency for two months. Both the markets have started showing signs of decoupling since the beginning of May, with Bitcoin changing course to follow its safe-haven rivals, including Gold, instead.

The yellow metal was also trading lower against the rising U.S. stock market.

There are also concerns about bitcoin continuing its downtrend below $9,000 due to its recently adjusted mining economics. On May 11, a pre-programmed algorithm inscribed within the Bitcoin protocol cut its mining reward by half for the third time in its 11-year lifetime.

The event sent its first wave of shock to miners as their capability to earn bitcoin rewards fell by 50 percent. That reflected on their income as well, which forced them to sell more Bitcoin in open markets. The so-called “capitulation” could continue as miners’ operational expenses rise.